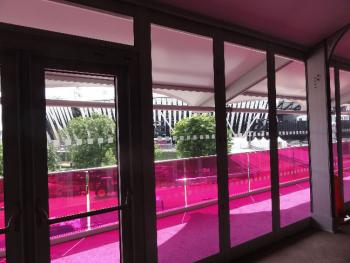 Custom Covers provided the finishing touches to the structure providing corporate hospitality on the Olympic park. The structure which overlooks the stadium itself comprises approximtely 16600 m2 of interior space in a triple decker. Custom Covers supplied the tack off finish for the whole structure.

For the first time in London fine dining and other forms of entertainment are on offer  in dedicated hospitality structures built at Olympic venues. In previous games, meals were served in nearby hotels and restaurants.

More than 150000 tickets out of a total of 8.8 million have been set aside for corporate hospitality guests of the main official hospitality provider Prestige Ticketing. In addition Custom Covers fitted out three Olympic structures for Arena Structures: in Horse Guard’s Parade venue for the beach volleyball, Greenwich Park home of Olympic equestrian events and Eton Dorney [Olympic rowing lake] where they delivered tack-off fit out for a 15x40 double decker with a 10x10 double decker reception. Philip Bish project manager who delivered the projects for Custom Covers commented "we were delighted to be involved in this high profile event and look forward to team GB bringing home the bacon".